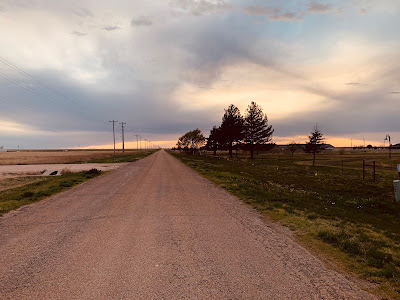 Daddy’s worth millions but he left you where he found you busting your ass working your second shift for the day in a restaurant off of some dirt road over in this rural town.

I’m not sure why you wish you were his and only his.

Maybe it’s the way he checks up on you.

Maybe it’s the way he keeps you from your friends.

Maybe it’s the way he keeps you at arms length and doesn’t give you what you want.

Doesn’t that just make you weak in the knees?

You say this man could change your life, if only.

Maybe someday Daddy will whisk you away to that factory town that the rest of the world rolls their windows up and holds their noses for and drives through as quickly as possible. Perhaps you can take a tour of the cannery together and learn everything there is to know about black beans.

A quiet lifetime of whispering to faceless men a hundred miles away in their homes with their great big walk in closets in which they will neatly fold and put their sexuality away at night along with any scent or trace or memory of you before they kiss their wives goodnight?

I wonder if Daddy ever thinks about the patterns in your irises when you’re not in his arms at night.

In 2008 or so I was working for ACS Healthcare doing the re-design work for health.gov and healthfinder.gov — new Dell servers, some shit had been hacked by China, some other issues.

I was working out of SAMHSA’s offices in… fuck I don’t even know where, Rockville Maryland or something like that? I always called it Rocktropolis in my old blog.

I used to do rails of coke in SAMHSA’s office, which I thought was fucking HILARIOUS.

It might have just been the call center. Small world huh?

You probably don’t believe me, but I guarantee you anyone who knows me will be like, yeah, if anyone did that it would be that fucking queen.

For what it’s worth I carried a sack and was sniffing it everywhere, it’s not like SAMHSA was special.

Weirdest little known fact about the Department of Health is that it’s actually a separate branch of the US Military! They have uniforms and  rankings and these cool skirts and stuff. They salute each other and then I guess they go down into some bunker where they get the missles ready to deploy on my ex boyfriend Will’s supergonnorhea.

I’m making that last part up.

The missles, not the supergonorrhea.

The kitty was aiight I’d still –

During the re-design there was a huge push to edit the content to a (sixth? eighth? fourth?) grade reading level. A couple of a people were copying and pasting articles manually from the old template to the new redesigned template.

So, yeah I know who and what they are and yo hablo un poco some evidence based approaches or whatever I guess.

I just remember someone casually handing me the article for alcoholism.

I finished that one.

Then they’d slide me the one for addiction.

So I finished that one.

Are you… tryna say something?

Fuck that’s so shady we should have been friends! 😭😭😭

And then I was asked to not return.

Story of my life. “What the fuck was he ON?”

*whips out the adding machine and starts punching buttons furiously*

I remembered them and included some info about them this time. 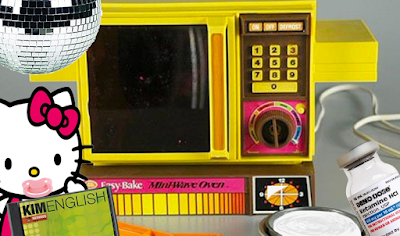 Welcome to the United Snakes
Land of the Thief, Home of the Slave
Grand imperial guard
where the dollar is sacred and proud

Let’s do this shit for real, come on now
Smoke and mirrors, stripes and stars
Stoning for the cross in the name of God
Bloodshed, genocide, rape and fraud
Writ into the pages of the law, good lord

The cold continent latchkey child
Ran away one day and started acting foul
King of where the wild things are, daddy’s proud
Cause the Roman Empire done passed it down

Imported and tortured a workforce
and never healed the wounds or shook the curse off
Now the grown up Goliath nation
holding open auditions for the part of David, can you feel it?
Nothing can save you, you question the reign
You get rushed in and chained up
Fists raised but I must be insane
’cause I can’t figure a single goddamn way to change it

But welcome to the United Snakes
Land of the Thief, Home of the Slave
The grand imperial guard
where the dollar is sacred and power is god

All must bow to the fat and lazy
The fuck you obey me and why do they hate me, who me
Only two generations away from the
world’s most despicable slavery trade
Pioneered so many ways to degrade a human being
That it can’t be changed to this day
Legacy so ingrained in the way that we think
We no longer need chains to be slaves
Lord, it’s a shameful display
The overseers even got raped along the way
Cause the children can’t escape from the pain
And they born with the poisonous hatred in their veins

Welcome to the United Snakes
Land of the Thief, Home of the Slave
The grand imperial guard
where the dollar is sacred
Hold up, gimme one right here, hold up

You don’t give money to the bums
On the corner with a sign, bleeding from their gums
Talking about you don’t support a crackhead
What you think happens to the money from your taxes?

Shit, the government’s an addict
With a billion dollar a week kill-brown-people habit
And even if you ain’t on the front line
When massa yell crunch time, you right back at it
You ain’t look at how you hustling backwards
At the end of the year add up what they subtracted
Three out of twelve months your salary
Paid for that madness, man that’s sadness

What’s left? Get a big assed plasma
To see where they made Dan Rather point the damn camera
Only approved questions get answered
Now stand your ass up for that national anthem

Eight rainbows in the Utah sky, watching clouds reflect in puddles as I’m driving by

Mormons believe that the earth will be renewed and rebuilt to its paradisiacal glory. I hope they carefully disassemble Utah, put it away in storage, and then put it back exactly the way that it is. Except maybe without the plastic litter. 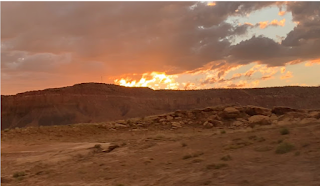 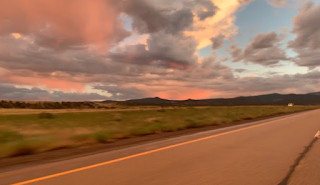 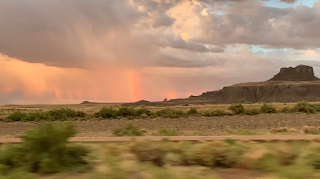 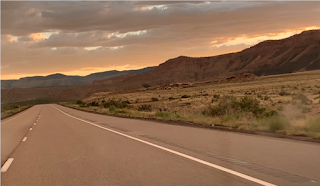 St. Therese loved nature, and often used the imagery of nature to explain how the Divine Presence is everywhere, and how everything is connected in God’s loving care and arms. Therese saw herself as “the Little Flower of Jesus” because she was just like the simple wild flowers in forests and fields, unnoticed by the greater population, yet growing and giving glory to God. Therese did not see herself as a brilliant rose or an elegant lily, by simply as a small wildflower. This is how she understood herself before the Lord – simple and hidden, but blooming where God had planted her.

Therese believed passionately that Jesus was delighted in his “Little Flower,” and just as a child can be fascinated by the grandeur of a simple flower, she believed that Jesus was fascinated by her as his “Little Flower.” Therese understood that she was just like the tiny flower in the forest, surviving and flourishing through all the seasons of the year. Because of God’s grace, she knew that she was stronger than she looked. Following the Carmelite tradition, Therese saw the world as God’s garden, and each person being a different kind of flower, enhancing the variety and beauty which Jesus delighted in. When various people tried to explain her powerful inspiration and her place within the Church, it always seemed to come back to one title “the Little Flower.”

In her autobiography, she beautifully explains this spirituality:

Jesus set before me the book of nature. I understand how all the flowers God has created are beautiful, how the splendor of the rose and the whiteness of the lily do not take away the perfume of the violet or the delightful simplicity of the daisy. I understand that if all flowers wanted to be roses, nature would lose her springtime beauty, and the fields would no longer be decked out with little wild flowers. So it is in the world of souls, Jesus’ garden. He has created smaller ones and those must be content to be daisies or violets destined to give joy to God’s glances when He looks down at His feet. Perfection consists in doing His will, in being what He wills us to be.